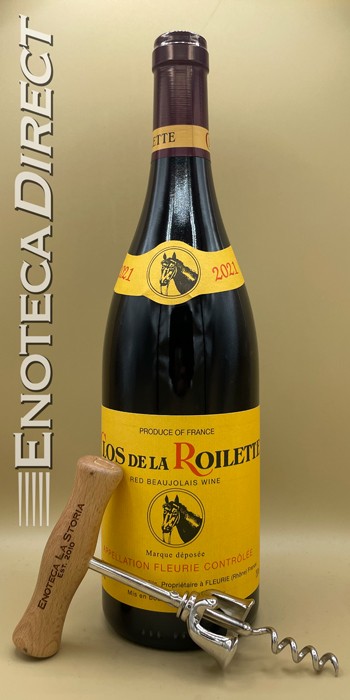 100% Gamay, sustainable farming, minimal SO2. Whole-cluster, semi-carbonic maceration in concrete for 14 days. Eight months aging in foudre. One gram of SO2 is added per hectoliter after malolactic conversion. If deemed necessary, another gram is added at bottling.

The Couderts say their particular terroir (mainly clay and manganese), and the age of their vines account for the richness of their wine. It has a deep blackcurrant color with a hint of purple, a restrained nose of crème de cassis, a rich, full mouth with aromas of cassis, black cherries, and a nutty character, and finishes with zesty acidity. This is a wine that ages gracefully and takes on the aromatic character of a Pinot Noir.

In the 1920’s, when the Fleurie appellation was first created, the former landowner was infuriated with losing the Moulin-à-Vent appellation under which the clos had previously been classified. He created a label, using a photograph of his racehorse Roilette, and used the name Clos de la Roilette without mentioning Fleurie. The owner vowed not to sell a drop of his wine on the French market and the production went to Switzerland, Germany and England.

By the mid-1960s, the owner’s heirs had lost interest in the clos and a large portion of the land had gone wild and untended. In 1967, Fernand Coudert bought this poorly maintained estate and replanted the vineyards. His son Alain joined him in 1984, and has been the winemaker since.