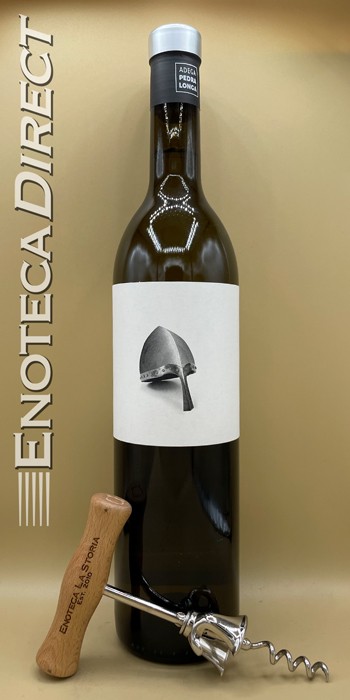 100% Albariño. Harvested by hand in 16 kg crates. Pressed without the addition of sulphites. Temperature controlled fermentation with native yeast in stainless steel tanks. Malolactic fermentation on the lees and subsequent resting on the lees for 6 months. Made with estate grapes from 15 year old vines, together with those of some selected vine growers, all organic and biodynamic. The label and "Terra de Godos" name refer to the history of Viking incursions into Galica.

About Adega Pedralonga: In 1982 Francisco Alfonso planted this seven and one-half hectare cru on a pure granitic hillside, ten miles from the Atlantic Ocean. For years they sold the wine locally and unlabeled. In 1997 they founded the winery as it is known today: Pedralonga, which means “big rock” in Gallego, a reference to the huge chunks of granite sticking out of the soil. It is now run by Francisco’s son Miguel.

The vineyard has always been farmed organically and in 2007 they began integrating biodynamic practices. Miguel is fond of the Galician saying “A man who does not watch the moon does not reap the harvest.” They closely follow the phases when making farming decisions. They plow only when needed in order to combat erosion caused by the wet climate and promote the vineyard’s natural biodiversity. In the cellar Miguel does as little as possible. He doesn’t de-stem the Albariño grapes. He’s only using native yeast and doesn’t block malolactic fermentation with the belief that the natural process is part of the vintage variation. The wines are all aged on the lees for extended periods before being bottled.