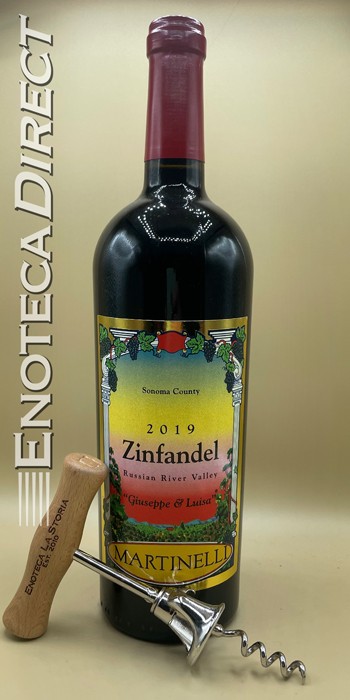 Giuseppe and Luisa Martinelli planted three acres of Zinfandel in the Russian River Valley in the 1880s.The old vineyard is now known as Jackass Hill and remains the steepest non-terraced hillside vineyard in Sonoma County. Nearly one century later Giuseppe and Luisa’s grandson, Lee Martinelli Sr., followed in their footsteps by planting a Zinfandel vineyard. He grafted bud wood from the centurion vines onto low-vigor rootstocks and planted them one meter by two meters apart, equating to about 2,000 vines per acre, on a rocky knoll above the Martinelli Winery Tasting Room in Russian River Valley.

This wine has a bright nose with comforting aromas of raspberry compote, warm vanilla and white peach. Mouthwatering upon entry, the palate does not disappoint. Lush layers of juicy raspberry, red plum and nectarine fill your mouth while light barrel spice flavors linger in the long, fresh finish.

Heavy rainfall and floods dominated late winter and early Spring 2019. This rain pushed bud break into late March and early April. Both April and May were cool which slowed down the growth in the vines and stretched out ripening. The summer was very temperate, with a bit of heat just before harvest to help push the flavors. Overall we were around 10 days later in all stages from bud break to harvest than in the 2018 vintage. This long growing season allowed for full and rich flavor development.

97 points, Robert Parker's Wine Advocate. "Medium ruby-purple in color, the 2019 Zinfandel Giuseppe & Luisa bursts with singular aromas of dried lavender and citrus peel, smoky, mineral-like undertones and loads of exotic spices over a core of wild berry preserves and peaches. It's incredible in the mouth, its full flavors delivered in a silky, ultra fresh and lifted frame, and it finishes with loads of floral nuance. Wow!"

95 points, Antonio Galloni's Vinous. "The 2019 Zinfandel Giuseppe & Luisa shows all of the intensity of the Martinelli wines, but with an extra kick of floral overtones and acid brightness to perk things up. Cinnamon, crushed red berry, wild flowers, mint and blood orange all run through this expressive, silky Zinfandel. The blend of Jackass Hill and Jackass Vineyard Zinfandel clones on four different rootstocks, which results in different ripening cycles and harvest times, all of which translates into notable complexity in the finished wine. Drinking window: 2024 - 2039."