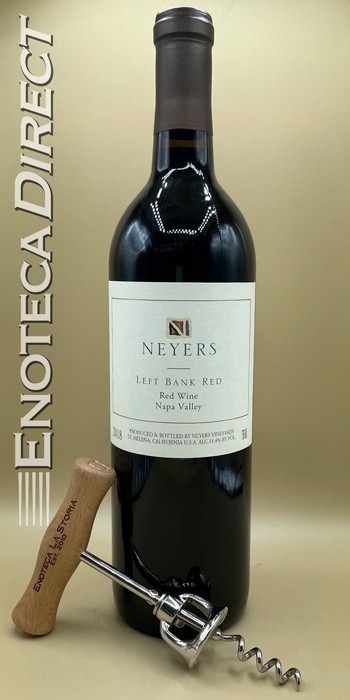 This wine is a blend of equal amounts of Cabernet Sauvignon and Merlot from vineyards on the left bank of Conn Creek as it flows through the Neyers ranch in Conn Valley. The soil is a deep outcropping of gravel, and the wine is striking example of organically grown fruit and our traditional winemaking practices.

From the winery:  "The best vineyards of St. Julien sit for the most part close to the Gironde River, so over the centuries mounds of gravel have formed atop the limestone base, making the wines from the area round and gentle. They’re attractive in their youth too, yet have plenty of tannin to become among the longest lived wines of Bordeaux.

Deep gravel deposits are uncommon in the Napa Valley, but the few that we have are found near year-round streams, normally in the hills elevated from the valley floor. One such site is where Conn Creek passes through our Neyers ranch in Conn Valley, and we enjoy a nearly continuous flow of water during its journey from Howell Mountain south and west, to the fresh-water reservoir of Lake Hennessey. This trek of nearly 5 miles spends almost 500 yards traveling through the southern-most reach of our 45-acre ranch, and over the centuries has deposited more than 50-feet of gravel in some spots along the creek’s left bank.

Soon after we purchased the property in 1984, Dave Abreu suggested we bring in a consulting geologist who confirmed the presence of a significant gravel deposit, and we made the decision to develop the property closest to the creek to Merlot. A few years later we purchased a neighboring 10 acre parcel and this time the section adjacent to the creek was planted to Cabernet Sauvignon. We were content to bottle the two wines separately for several years until winemaker Tadeo Borchardt suggested that we consider a blend of roughly equal amounts of the two varieties. We were delighted with the results and this new wine based on terroir rather than grape variety was named Left Bank Red.

The Merlot parcel is planted to a spacing of 5’ between vines and 9’ between rows, or 968 vines per acre. The newer Cabernet Sauvignon parcel is planted 4’ X 6’ – 1814 vines per acre. They flower at different times, and ripen differently as well. The deep gravel soil has as much impact on the profile of the wine as the grape variety though, so each year the Left Bank Red is delightfully perfumed with an underlying note of violets and red fruit. The aroma is intense but hardly simple or direct. You must take some time to search for it, but you’re rewarded by its complexity. That remarkable softness remains, along with a blend of flavors that are approachable and satisfying. We seek elegance here, and in vintages like the 2018 Left Bank Red we find it."

91 points, Wine Spectator. "Refined, with a sleek texture to the raspberry, dark currant and blackberry flavors, this is filled with fresh acidity. Crushed green herbal and spice notes come in on the finish. Cabernet Sauvignon and Merlot. Drink now through 2024."