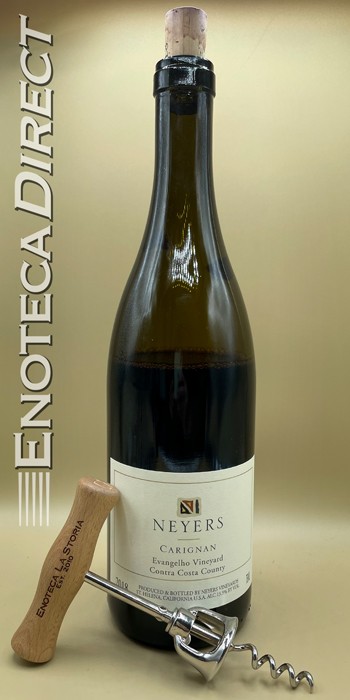 "Few things in my wine career would have ever signaled that I would become a spokesman for wines made from Carignan. I suspect that I tasted Carignan without really knowing it early in my career. My first trip to France for Kermit Lynch began my education though. It was January 1992, and I flew to Marseilles with a group of 8 customers, rented a 9 passenger van, and immediately drove to a small property in the northern Languedoc, just outside of Montpelier, for my first formal producer visit. The group – all of them distributors from several states in which we sold wine -- tasted a barrel sample of a 1991 Vin de Pays Rouge, and before I could even begin to make my tasting notes the customers began to yell orders. I’ll take 56 cases, said my distributor from Boston. I’ll take 112 cases said my Washington distributor, who was standing next to him. Oregon followed with an order, and orders were quickly added to by Maryland, Chicago, and Florida. I wrote them all down in my green notebook, then turned to the producer and asked him what grape was used in the wine. Carignan, he replied, 100% Carignan, from 70 year-old vines. We probably visited 80 producers during that two-week long trip, and 20 of them made wine with some Carignan in the blend. The styles varied dramatically, but the wines were all solidly made, enjoyable, and fairly priced.

I came home from that trip and set out in search of other wines made from Carignan. I bought all that we imported and tried them at home until I grew even more comfortable with the variety. I was attracted to many of them, and felt an appreciation for them that persists even today. Then, 12 years ago, Tadeo and I visited Maxime Magnon. We had just begun to import his wines and I liked them. He was talented and full of fresh ideas, so we went to see him in his ‘hideaway’, in the hills above Carcassonne, in the ancient village of Villeneuve les Corbières. We drove even higher up in the hills to examine his vineyards, rocky parcels planted to old, gnarly vines.

Then we visited his barns where he kept the animals he used for his farm labor – oxen, cows, horses, sheep, goats and pigs. He had no tractor, he explained, as all of his farming was done by hand or by animal. Then we tasted through his wines, and in a few short minutes my life was changed forever, and I’ve never thought about Carignan the same way again. Someone told me recently that we were the only winery in the Napa Valley to produce Carignan. I take that as a point of honor considering the great wines from the old world that are made from this grape.

Our 2018 Carignan from the Evangelho Vineyard is especially successful. These vines are now approaching 140-years-old, we get only a few tons each vintage.  We  ferment the fruit naturally, in an open-top fermenter, using only native, wild yeast. The grapes are all crushed by foot – not machine – and after a 45-day maceration, the wine is aged for one year in neutral French oak barrels.  We bottle it unfiltered. The yields in 2018  were less than one-half of a ton per acre, so the wine is dark and rich, but it has an even more attractive aroma, perhaps due to the cold growing season and the slower than normal ripening. We love the combination of fruit and mineral that’s integrated with the flavors of tropical fruit, pomegranate, and dark plum. One taste and it’s easy to see why Carignan is one of the most popular wines in Europe." - Bruce Neyers