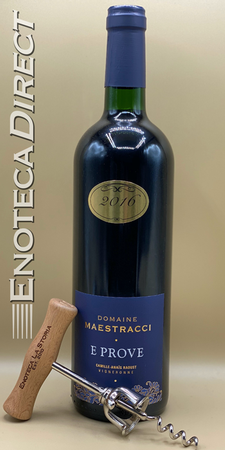 On Corsica, high in the foothills of Monte Grossu mountain, inland from Calvi, lies the granite plateau of Reginu, an area long known for U Vinu di E Prove – the wine of the Prove. in the early 1980’s, Roger Maestracci passed along the reins of the domaine to his son-in-law, Michel Raoust, who has since handed over the winemaking and winery management to his daughter, Camille-Anaïs Raoust. The wines Camille makes are quintessential Mediterranean food wines.

35% Niellucciu, 35% Grenache, 15% Sciaccarellu, 15% Syrah. 25-40 year-old vines. Grapes are handpicked. Wine is fermented and then aged 1 year in steel, then aged another year in large, used foudres.

Juicy, ripe cassis and blackberry are shadowed in the nose by their high-toned counterparts, along with lavender, rosemary, and game. The tang of berry skin; crunch of seeds; piquant glow of resinous herbs; sweet pungency of smoked meat; and maritime salinity, all combine for an effect of delightfully invigorating and mouthwateringly saline persistence. A unique wine - and an amazing value!