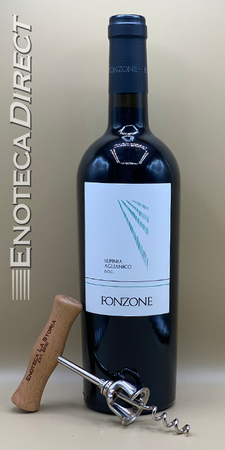 100% sustainably farmed Aglianico from clay and limestone soils, fermented and aged in stainless steel for freshness.

Tasting Notes
In the glass it’s a deep, nearly opaque ruby-black moving to magenta at the rim, redolent of crushed blackberry, Morello cherry, cranberry, violets, dried herbs, leather, ground espresso, and a characteristically Aglianico note of pipe tobacco. It is medium-bodied for a wine from this part of the world, vivid and floral and well-balanced in its mix of saturated fruit and earthy savor. Decant it about 30 minutes before enjoying.

About Fonzone
Fonzone is a relatively new arrival on the Campanian wine scene, having been founded in 2005, but Lorenzo Fonzone Caccese and his sons have wasted no time establishing a reputation for beautifully crafted whites and reds alike. The estate is based in Paternopoli, one of the villages in the Taurasi appellation area, where they cultivate 12 hectares of Aglianico in soils of clay and limestone. Vineyard altitudes extend from 360-430 meters in these Apennine foothills, a cool environment for the late-ripening Aglianico, which often isn’t harvested until late October or early November. Taurasi is nicknamed “The Barolo of the South” for good reason—the long growing season results in reds of stunning aromatic complexity and powerful structure.