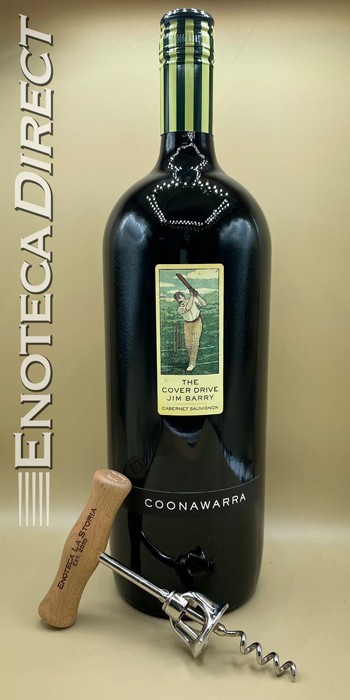 This is a screaming deal on full bodied, balanced Cabernet Sauvignon that's smack in the middle of its prime drinking window.  Coonawarra is a fairly cool growing region, meaning that the fruit here gets almost an extra month of hangtime as compared to the nearby Clare Valley.

This 2013 vintage, bottled in magnum (magnums age longer and more gracefully) shows off classic Australian Cab notes of mint, eucalyptus, blackcurrant and dark berries with hints of cocoa and pepper and just a hint of vanilla. Tannins are present but already softened by the time spent in bottle.

Be the hero of your next party or cookout and bring a few of these magnums by- no one will have to know you didn't break the bank!

Situated on the southern boundary of Coonawarra (Aboriginal for Honeysuckle), the old Penola Cricket Ground first saw a ball bowled in anger and the flashing cover drives of local champions in 1950, but was retired in 1996. The Barry family purchased the 30 acres of vacant land in 1997. To preserve the a little piece of the of Coonawarra cricketing history, the original pavilion was retained, and the vines, first planted in 1999, were positioned around the cricket pitch.

The bottle label depicts that of an anonymous cricket player playing Don Bradman's famous 'Cover Drive' stroke. ''The Cover Drive is one of the most classic shots in cricket. I was inspired to name our wine in honour of this masterly stroke after purchasing a retired cricket ground in 1997. It seemed only fitting to pay tribute to the history of the land. Like a cover drive, this is a wine full of length and character, to be shared with friends.'' ~Peter Barry - Second Generation Family Winemaker

90 points, Robert Parker's Wine Advocate. "A blend of Clare Valley and Coonawarra fruit, the medium to deep garnet-purple colored 2013 Cabernet Sauvignon The Cover Drive opens to a very minty black and red currant nose with tons of cloves, cedar and exotic spices. Full-bodied and concentrated on the palate with plenty of menthol and cassis flavors, the firm and chewy tannins hold through the long finish."